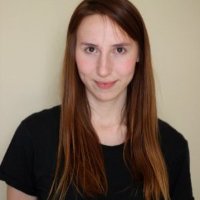 Bachelor of Science, Computer Science and Engineering @ University of California, Los Angeles From 2009 to 2011

Looking for a different Olga Galchenko?